Flying with a Service Dog 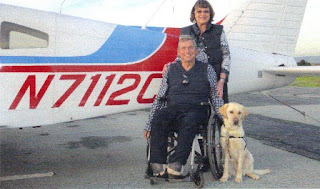 Hans and his wife Betsy have been  passionate and enthusiastic pilots for many years.  They own a Cherokee and also Hans favorite, a motor glider, both based at Palo Alto Airport.  The controls have been converted so he can fly with his hands only.  (I am sure for many of you that are rudder challenged, you probably wonder why all airplanes aren't rigged this way).

Recently Hans got a service dog, Rilla, who now goes everywhere with him and is his flying companion.  If you feel like I do about my dog, what a great thing to be able to take your dog everywhere, especially flying.  I hope she likes Mutt Muffs, those cute ear protectors for dogs.

Sue Ballew
http://www.skytrekker.net/
Posted by Skytrekker Aviation at 9:55 AM 3 comments: 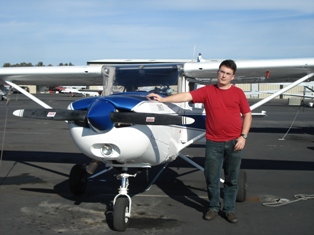 Mike started his training in Canada in a low wing airplane.  He was already familiar with many of the systems and concepts of aerodynamics and how the airplane flys.  Once he was up to date on the regulations in the US and had a thorough understanding of the complex airspace in the Bay Area, and the fine tuning for the high wing Cessna was complete, Mike was more than ready to solo...which he did on January 22.  In his spare time Mike is an avid paraglider...he really loves the skies!

Sue Ballew
http://www.skytrekker.net/
Posted by Skytrekker Aviation at 10:59 AM 2 comments:

The following article is written for publication in Pacific Flyer, by Michael Church, one of my former Flight Instructors from Sunrise Aviation in Southern California.  I find it particularly interesting and relevant as I am continually faced with how to effectively teach the appropriate response for a low altitude emergency on takeoff.  Michael sheds some light on this subject.  Be sure and watch the video.


GO AHEAD—TURN BACK
For the past several months I have been chiseling away at the NEVER TURN BACK credo, the cast-in-stone rule that says you must not attempt to turn back to the airport in a low altitude takeoff emergency.

It has been tough going: "NTB" has long since passed into the realm of "things we just know and never need to question."

Quite a few readers report they have watched the turn-around video I recommended (www.aerobats.com/turn-arounds.html) with positive results. Still, fifteen minutes of video is a far cry from the depth of understanding required by a real emergency. Once the engine coughs and your heart rate doubles, certainty, not theory, is crucial.

PRACTICE
The first critical key to success in turn-arounds is practice and preparation. It is certain if you don't know that you can do the maneuver safely, you won't be prepared to react as quickly as an emergency demands. Instead, you'll dither away the opportunity, then either settle for a straight-ahead crash, or conceivably attempt a turn that has by now become truly impossible.

Practice is simple: using a safe altitude, establish a stable climb at Vx (not Vy), then cut the power, noting the altitude. Allow for a couple of seconds lost in shocked disbelief, then lower the nose as you bank steeply and pull to a high angle of attack. Some level of buffet is acceptable, and inadvertent stalls are desirable as you learn where the limits are. You will be amazed at how quickly you can get turned around.

There are two fairly obvious prerequisites: first, you need to be able to make a gliding turn with a 45° or 50° bank angle without losing control of pitch.

Second, you have to be comfortable with the possibility of an inadvertent stall in a steeply banked attitude, a stall which will require recovery without rollout from the turn.

Now you see why turn-arounds are called "impossible": to the shame of the FAA and virtually the entire teaching community, few pilots are ever required to develop these two critical skills.

If this style of maneuvering is completely foreign to you, get a CFI to come along, first making sure that his or her credentials indicate they know how to do this themselves. If you get a blank look, go find another; they're out there, often identified as "aerobatic" CFIs.

ALTITUDE
Once you have developed the necessary turn-around skills, the second key to success is correct identification of a safe turn-around altitude. I'll call it STA. The number changes with three important variables, pilot skill, airplane model and density altitude and can only be determined through trial and error in a specific airplane model. Once your turn-around practice has become satisfactory, you can start the process of figuring out what is high enough and what isn't.

SET UP
The final key is climb management. If you insist at climbing at Vy, as you were almost certainly taught to do in primary instruction, no amount of skill in turning around is going to do much good. Given average runway lengths, Vy climbs are simply too flat and carry the plane too far upwind.

The liability of a flat climb is easy to see: if after a successful turn-around you find you are too far away to glide back, it is easy to argue the turn was a bad idea and only made things worse. One more win for the NTB bunch.

The bottom line: in single engine airplanes, unless you fly from Edwards AFB, forget Vy altogether below 1000' AGL. It's a poor choice.

WHY BOTHER?
My last comment: almost nobody flies as I have described, and even fewer are prepared to turn back. Yet almost everybody survives, so why bother with all this?

The answer lies in the very statistics that produced the NEVER TURN BACK credo in the first place: enough pilots have gotten killed trying the maneuver to indicate that takeoff emergencies do happen.

If you fly a single engine airplane long enough, you will experience an engine emergency. Luck plays a part, and your engine problem might occur at low altitude shortly after lift-off. If you aren't prepared, maybe you shouldn't be carrying around your family and friends.
Posted by Skytrekker Aviation at 7:04 PM 2 comments: 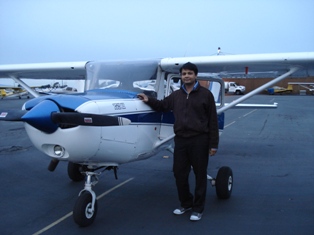 Congratulations to the new SOLO pilot, Pratul!!!  What a way to end the year...New Years Eve on a brisk afternoon at Palo Alto airport.

Many wonder how CFI's actually deal with the stress of soloing their students.  If you ask that question at the beginning of a student's training, it would seem hard to imagine turning that brand new student pilot loose in the air.  But, as time goes on, and you see the person make progress, gain confidence, and ultimately have the skill to handle situations, it is kind of something that just presents itself as the next step.

And this was the case with Pratul, who did a great job on his first solo as the controllers gave their congratulations and waved as we taxied back to parking!