Ioan grew up with aviation in his family, with his father flying in the Romanian Air Force.  Wanting his son to be diversified in his skills, his father insisted that Ioan learn the piano and accordion instead of learning to fly.  It wasn’t until much later that Ioan realized he could actually learn to fly an airplane.


With a 10 kt headwind, Ioan accomplished his requisite 3 landings and became a proud new solo pilot.  After the flight we went out to dinner to celebrate.  The waitress asked us if we were celebrating anything and I said “Yes, Ioan just soloed.”  She said “congratulations on being single!”  Ha!  I tried to explain what soloing meant, but I could tell she really didn’t get it.
Posted by Skytrekker Aviation at 8:49 AM No comments: 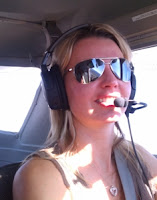 Congratulations to Masha who soloed on February 22nd, 2012!

As we were practicing landings in anticipation of Masha's first solo, the wind was increasing.  You really want that perfect day for a first solo as you want everything to go just right.


I was glad that her landings were turning out well so we could do this before things changed too much.  She dropped me off at the instructors bench, which had recently been removed at Palo Alto :-( , and she was off for her memorable experience.
Sure enough the winds picked up but mostly down the runway and she handled it beautifully.
Posted by Skytrekker Aviation at 8:29 AM No comments: