Have you ever thought about why you rarely see a women up on the flight deck flying your commercial flight?

Here is a great article posted on the blog GolfHotelWhiskey:  http://www.golfhotelwhiskey.com/why-arent-there-more-female-airline-pilots/comment-page-1/#comment-3146 .

As an airline pilot myself at one time, we were in a very small minority.  Although the passengers were usually surprised at seeing a woman, I always got positive feedback and great comments.
Posted by Skytrekker Aviation at 10:44 AM 1 comment:

By becoming an active participant of Women Of Aviation Worldwide Week, Skytrekker Aviation has shown its commitment to encouraging women to consider aviation as a hobby or a career. Please find attached your WOAW Certified Women Friendly Flight Training Facility seal. Display it on your website or printed material as you see fit to let your potential female customers know that they are in good hands when choosing Skytrekker Aviation as their training partner. 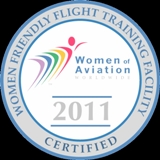 Thanks again so much for your support.

FAA is changing the Knowledge Test Pool of Questions

If you plan to take any of the FAA knowledge tests, do it quickly.  The FAA is in the process of adding 93,000 new questions to the existing knowledge bank of 7,000 questions.

So far the question banks affected the most by the changes include the Fundamentals of Instruction (FOI), Airline Transport Pilot (ATP), and Flight Engineer (FE).  The instrument test has also been affected but to a lessor degree.  But it is only a matter of time before the Private and Commercial are affected.

AOPA reported on planned changes to knowledge tests on June 23, 2010.  The project to bring tests up to date was expected to take about two years, drastically increase the number of questions in the test banks, and make the test Internet based instead of being stored on the computers of test centers.

AOPA and NAFI (National Association of Flight Instructors) have opposed these changes and have requested that the test banks be reverted back to the questions in place prior to the recent updates, and that students who failed the exams since the changeover be allowed to retest and have the initial failure expunged from their record.  They maintain that these changes must be coordinated with schools, training providers, and training materials updated, which will take time.

For more information read the letter to the FAA dated March 3, 2011 from AOPA and NAFI:
http://download.aopa.org/epilot/2011/110303knowledge_test.pdf