Byron Hot Springs Hotel
Did you know that a historic resort called the "Byron Hot Springs Hotel" just at the northeast edge of the small town of Byron, could be restored to its once magnificent sprawling grounds filled with natural hot springs, tropical palm trees, Mediterranean olive trees, tennis courts, and luxury hotel rooms?
﻿﻿
﻿﻿

A century ago it was a California premier spa hotel.  While it was open, it attracted Hollywood and the rich and famous. Then during WWII it was used as a top-secret interrogation center for prisoners of war.  After the war it served several other functions but then was closed for good in the 1980s.
A local developer, who has owned the property since 1989, has gathered up potential investors and hopes to have the property restored and operating in 2011.
For a glimpse of this historical property, if you happen to be flying in the area, take a moment to dip down and fly over for a great view.  Be aware of the numerous gliders and jumpers nearby at Byron airport. 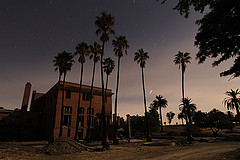