Icing--We're In It!!!
I was invited the other day to go as passenger on a trip down to Southern California in a TAA (Technically Advanced Aircraft).  I was somewhat unfamiliar with the aircraft and the advanced avionics with integrated auto pilot, but the pilot was experienced so I thought it would be informative and fun.  After reviewing the weather the night before, I had my doubts about going as the freezing levels were low and we had been having weather locally and along the route for the last few days.  But, that morning, the weather cleared out, with no indication of it moving back in prior to our return, and so I went. 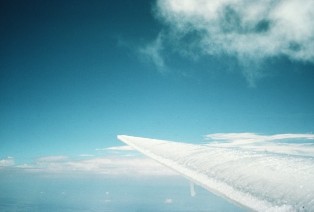 After picking up a passenger, our departure from Socal was over two hours later than I had estimated, and we had a pretty stiff headwind coming back.  As we crossed Gorman, the valley ahead already had a layer of clouds up to about 8000'.  No problem, we cruised easily at 12k.
Our return included a stop at Monterey for fuel, with ATC starting our descent early about 75 miles out.  At 8000', we were now in the clouds and after about 10 minutes, ice was forming on the windshield.   I offered "why don't we go back up and get above it" (which would have taken us right out of the icing conditions).  He said noooooo.
I looked over and noticed he hadn't yet turned the pitot heat on.  So I asked, "where is your pitot heat”? He said "doesn't the GPS take care of that?"  With the G1000, you have what is called an ADC - air data computer. The ADC processes the information from the pitot-static lines and displays the information digitally.  You basically get the same information as the old round gauges, and still use the same pitot tube and static port to bring the air in.  An obvious misunderstanding of the capabilities of the equipment and over reliance on the brains of the system.


As we were painting the weather graphically with Nexrad (weather delayed by a few minutes), it showed precipitation as dark green as ATC vectored us, and we proceeded directly into it.  I was wondering why this pilot was allowing ATC to put us in the middle of this weather.  The pilot had not been very clear with ATC as to what our true situation was.  So I asked "what are you going to do now?"  And he said finally "what would you like me to do?”  I said turn left NOW.  He got a left turn....and I said more left, then more left, and more, as each second of delay was becoming critical.  The windscreen was solid ice now and there was ice forming on the leading edges and speed brakes.  Sheesh!


When we finally descended through 4000' and broke out of the clouds, the ice began to break off of the wind screen and disappear off of the wings.  I thought we were never going to get out of those clouds!!


One important thing I learned from flying with the airlines is, icing is critical, even if you have anti-icing or de-icing equipment.  You must tell ATC what the situation is, and exactly what you need, and not let them decide.
Had we stayed above the weather as I suggested, or out of the green altogether, we may not have taken on ice.  Although with our late departure, and with the freezing levels continuing down to about 4000', the prudent thing might have been to land somewhere along the route and wait for the weather to move out.
There are a few lessons to be learned here, not the least of which is to be very, very familiar and knowledgeable of your aircraft and all of its systems.  And this was a wake-up call as an instructor to be even more vigilant and proactive, even when, and especially when, I am not acting in the capacity of flight instructor, and I am unfamiliar with the PIC.
In the past, the FAA considered any situation where temperatures were below freezing and there was visible moisture to constitute known icing conditions. A 2006 interpretation from the FAA also included relative humidity as a factor, grounding many GA pilots even when no visible moisture was present.
The latest discussion between AOPA and the FAA seems to be between the difference of "known icing conditions" referring to information available before and during the flight, and "known ice", known or observed or detected ice accretion--actual adhesion to the aircraft, rather than the existence of potential icing conditions.
Here are two articles and a letter from the FAA that refer to icing, the definitions, and interpretations.


http://www.avweb.com/news/airman/184265-1.html
http://download.aopa.org/epilot/2009/090126icing.pdf
Most GA aircraft are specifically prohibited from flying into "known icing conditions".  As a general aviation pilot, when in doubt, why dispute whether there are "known icing conditions", or "known ice", when you can always wait for a better day.

Read "Spring is almost here...except for the Ice", for specific effects of ice on your airplane.
Sue Ballew
http://www.skytrekker.net/
Posted by Skytrekker Aviation at 7:11 PM