Fuel...are you sure we have enough? 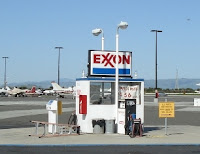 
How many times have you said, "Oh, we have enough fuel...we are only going to such and such...let's don't take the time to add more fuel”.

Prior to one of our mini cross country training flights, while preflighting, I asked my student how much fuel we had.  He said we had plenty based on his flight plan, including over estimates and at least one hour reserve, (more than enough he thought).  I asked, "Are you sure you don't want to add more?"  He was excited and ready to go and he said "Nope, we're good."  I was thinking OK, I will let him do this, knowing we probably had enough, although I would have taken on more had I not wanted to make a point.

On the way to Salinas he couldn't find the airport.  So, we did lost procedures and circling until he found it.  Same thing happened with Watsonville. Then, each time he needed extra time on the ground in runup to get ready for the next legs.  And guess what?  By the time we departed Watsonville, we had eaten up about an hour more than he planned.  When we landed, he said "did you notice how I didn't talk the last 30 minutes?"  I said, "Yes, what's up?"  He said, "I was so nervous about the lack of fuel on the way back, that I couldn't speak."  (It wasn't critical but he definitely discovered his comfort level).

Last Saturday, this same student was off on a solo cross country flight to Santa Rosa.  At about 4 pm I got a call at West Valley SQL from the tower saying my student couldn't land due to the winds exceeding his endorsement, and would I please come up to the tower.  (I had endorsed him for max 18 kts, 8 kts crosswind, and no gusts).  The winds had picked up more than forecast and were about 16-18 kts gusting 19-21 kts, and all airports in the Bay Area were reporting similar conditions.  The good thing was the wind was only 20 degrees off the runway.

By now he had been circling outside of SQL's airspace for at least 20 minutes.  The first thing I thought is, "Will he need to go somewhere else?" "Did he take on extra fuel?"  "Inside the tower we were watching the wind meter to determine if the wind was steady as reported.  I made the decision to ok the landing.  We were all rooting for him as he made his approach.  I wouldn't say it was his best landing, but it certainly wasn't his worst either.

As we talked later, I found out that I had nothing to worry about regarding fuel as he had learned his lesson very well, and had topped off the tanks, even though he was only going to Santa Rosa.  You never know when an unexpected situation will arise and you have to divert.  Sometimes the lessons that make you the most uncomfortable are the lessons learned, and will pay you back ten times over later.
﻿﻿﻿

For more information on safety and to read about cross winds, see "Diversion due to Cross Winds and Wind Shear".
Sue Ballew
www.skytrekker.net
Posted by Skytrekker Aviation at 5:15 PM